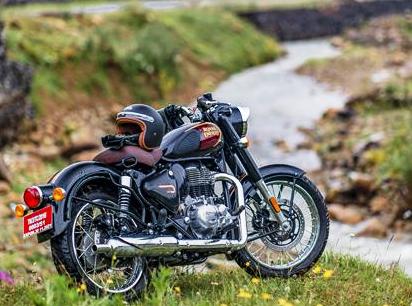 New Delhi: Royal Enfield on Wednesday said it has launched an all new version of Classic 350 motorcycle in the country with price starting at Rs 1.84 lakh (ex-showroom Chennai).

In 12 years and more than three million motorcycles later, the Classic has built a legacy of its own, and the new Classic 350 is all set to take this legacy ahead, the company, which is a part of Eicher Motors, noted.

“The Classic 350 launched in 2008, was a modern and capable motorcycle that symbolised the timeless post-war styling from the heydays of the British motorcycle industry.

“Its captivating design language and simplicity coupled with dependability, catapulted the Classic to global popularity, and it went on to redefine the middleweight (250-750cc) motorcycle segment,” Eicher Motors MD Siddhartha Lal said.

The company so far has been consistent in its pursuit to build timeless, classic, beautiful motorcycles that are great fun to ride, and the new Classic 350 does just that, he added.

“Built ground-up, on our modern J-series engine, with an all-new chassis, the Classic 350 offers a tremendously refined and perfect ride experience that almost feels like riding again for the first time,” Lal said.

He further said: “We are confident that the incredibly refined all-new Classic 350 will once again redefine the mid-size motorcycle space globally”.

The new Classic 350 comes powered by a 349cc air-oil cooled single cylinder engine which generates a power of 20.2 bhp.

Designed and developed by designers and engineers based at Royal Enfield’s two technology centres, in India and the UK, special care has been paid to ensure a superlative ride experience on the all-new Classic 350, the company said.

“With sharp focus on the middleweight motorcycle segment, and our firm belief in the trend of premiumisation in the Indian automobile industry, we are confident that the new Classic 350 will further fuel our growth and our ambitions,” Royal Enfield Executive Director B Govindarajan said.

The all-new Classic adds a new chapter to Royal Enfield’s legacy of building authentic post-war era British motorcycles that are loved by enthusiasts around the world.

The legacy of the Classic dates back to 1948 with the groundbreaking Royal Enfield Model G2, the first to have swinging arm rear suspension on a full production motorcycle. The model served as a strong design inspiration for the hugely popular Classic 500 and Classic 350 launched in 2008.

Ever since its launch, the Classic has emerged as a motorcycle that has redefined the middleweight motorcycling space and spawned the revival of Royal Enfield, kickstarting its journey to lead the segment globally.PTI