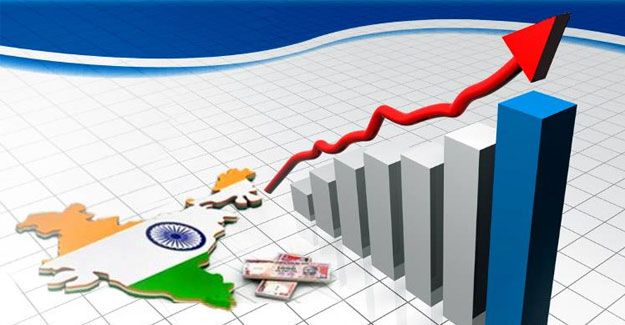 New Delhi (PTI): The Indian economy grew by a record 20.1 per cent in the April-June quarter, helped by a very weak base of last year and a sharp rebound in the manufacturing and services sectors in spite of a devastating second wave of COVID-19 cases.

India is now on track to achieving the world’s fastest growth this year.

While there was a sharp year-on-year expansion, sequentially the economy slowed down by 16.9 per cent over the January-March quarter and was 9.2 per cent short of pre-COVID levels of April-June 2019, according to the first quarter GDP data released by the National Statistical Office (NSO) Tuesday.

The economy had contracted by a massive 24.4 per cent in April-June 2020 after one of the world’s most stringent lockdowns was imposed to curb the spread of coronavirus infections, crippling economic activity. GDP had grown by 1.6 per cent in the January-March 2021 quarter.

The sequential contraction in GDP in Q1 of the current fiscal came after three consecutive quarters of expansion.

GVA expanded by 18.8 per cent year-on-year in Q1 but sequentially it recorded a double-digit contraction of 13.3 per cent given the disruptions in April-May due to the lockdown restrictions imposed in the wake of the second wave of COVID-19.

The rebound in the first quarter of the current fiscal was led by a better-than-expected manufacturing performance and a milder hit to services, combined with a robust pace of vaccinations. Vaccination coverage has risen from 4.7 per cent of the total population in January-March to 24.5 per cent in Q1.

The rebound was led by a near 50 per cent year-on-year jump in manufacturing, 68.3 per cent rise in construction activity and 34.3 per cent growth in services such as trade, hotels and communications.

Agriculture, which was the only sector that showed growth amid the stringent lockdown in April-June last year, posted an impressive 4.5 per cent growth over the previous year. Last year, it had expanded by 3.5 per cent.

Despite the record growth in the first quarter, the Indian economy is yet to reach pre-COVID levels.

Barring agriculture, the size of all other sectors is below pre-COVID levels. Manufacturing at Rs 5.43 lakh crore is lower than Rs 5.67 lakh crore in April-June 2019, while sevices at Rs 4.63 lakh crore is way short of the pre-pandemic levels of Rs 6.64 lakh crore.

Agriculture at Rs 4.86 lakh crore is higher than the pre-COVID level of Rs 4.49 lakh crore.

The economy started to emerge from the deep slump towards end of 2020 but was again hit by the second wave in April-May.

However this time the impact was not so severe because of less stringent localised lockdowns.

Those projections are the highest among major economies, surpassing China’s 8.5 per cent.