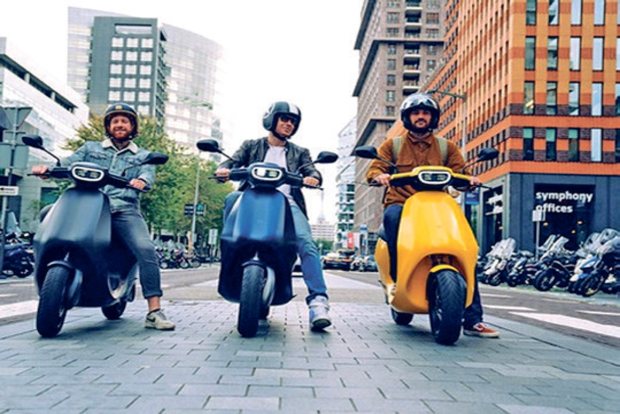 Bengaluru: Ola Electric forayed into the green mobility space with the launch of its first electric scooter, Ola S1, at a price starting from Rs 99,999 (ex-showroom).

“I want to underline that it is going to be the best scooter ever made. It has the best design, performance and technology,” Ola Chairman and Group Executive Officer Bhavish Aggarwal told reporters here.

With never seen before technology, design and features, the company is looking for a global leadership in the electric two-wheeler segment, he added.

The company will officially open Ola S1 for purchase from September 8, and start deliveries across 1,000 cities and towns in October.

Till September 8, the company will keep accepting the bookings at Rs 499, Aggarwal stated. He noted that Ola S1 solves one of the biggest challenges which has hampered the growth of the EV sector in India has been the upfront cost.

“In states with active subsidy grants, Ola S1 will be much more affordable than many petrol scooters. For instance, after state subsidy in Delhi, the S1 would cost just Rs 85,009 whereas in Gujarat it would be only Rs 79,000,” Aggarwal said.

The company has also tied up with banks and financial institutes for an EMI plan starting at Rs 2,999, he added.

The Ola S1 comes with a range of 181 km, a top speed of 115 km per hour and can be fully charged in less than 40 minutes with a fast charger, and around six hours with the portable charger that will come with the scooter and can be installed at homes.

The scooter comes with various features like reverse mode, hill hold function, driving modes and cruise control and takes less than 3 seconds to cross 0-40 km per hour. It comes with keyless lock and unlock system and safety features like an anti-theft alert system and geo-fencing.

“Scooters are meant for the young but the industry has made such a vibrant category dull and boring and we are hopeful that we are going to change that,” Aggarwal quipped.

The scooter comes in 10 colours with in-house development 8.5 KW motor and 3.97 kWh battery packs. Ola is setting up a manufacturing plant, spread across 500 acres, in Tamil Nadu.

The company has previously said it is investing Rs 2,400 crore for setting up the facility that will create nearly 10,000 jobs and will be the world’s largest scooter manufacturing facility upon completion.

Aggarwal noted that the first phase of the ‘Futurefactory’ is nearing completion. “By the end of the month, it is going to be ready. We bought the land in January and we put up the first pillar at April-end,” he noted.

The company will initially start with 10 lakh annual production capacity and then scale it up to 20 lakh, in line with market demand, in the first phase. When fully completed, the plant is going to have an annual capacity of one crore units that is 15 per cent of the world’s entire total two-wheeler production.

“We are building this scale because it is the only way of accelerating this transition to sustainable mobility,” Aggarwal noted.

Asked when the company expects to reach the one-crore production mark, he said: “Ten million production depends how fast the market scales up. We are estimating it to be within the next two years.”  “Everything is being done by us. We are working with suppliers for mechanical parts but core parts of electrification are being done by us in-house. It is part of our strategy to control the technology ourselves and also to design the components ourselves and then manufacture them on our own,” Aggarwal said.

Ola Electric would source items like plastics and tyres from outside vendors and for that, it plans to build an entire ecosystem around the factory, he added.

On charging infrastructure, Aggarwal noted that the company would have established presence across relevant cities by the time deliveries commence in October.

“Charging station roll out will follow sales rollout, so it will be sales, then charging stations but every city will have at least relevant scale as we begin,” Aggarwal said.

Ola had earlier stated that it would like to have 5,000 charging stations across 300 cities and towns across India.

“That’s the goal, we will be targeting that…The company has tied up with various partners and those will get operationalised once deliveries begin,” Aggarwal said, adding that all kinds of developers, office complexes and even hospitals would be covered under the exercise.

He noted that the scooter would have a hybrid approach when it came to actual sales. The company would have physical experience centres and online channel to sell the product.

The sales outlets or the experience centres would come up across the country over the next few months, Aggarwal said.

The executive pointed out that the company has received strong demand from about 1,000 towns and cities. “The EV revolution is here to stay whether incumbents like it or not. Consumers have shifted in their mindsets and before we know it, people will be buying only electric,” he noted.

He further said: “When we are going to share our bookings number with you in few days, I can assure you that it is going to be the highest number of reservations ever for any automobile launch in the country.”  On exports, he said the shipments would begin soon.

“We have been very clear about the fact that we can build in India for the world and (demand for) two-wheelers is growing globally. All across the world, especially after COVID, people want personal mobility options and we want to be the global leaders in this segment,” Aggarwal noted.

The company’s electric scooter would be relevant in markets like ASEAN (Association of Southeast Asian Nations), LATAM (Latin America) and Europe, he said.

Especially after COVID, even the West has opened up and more and more people in Europe want to buy electric two-wheelers, he added. Even in the US and North America, people have started to experience two-wheelers for urban mobility, Aggarwal said.

“Over the next four-five years, we will see a lot of evolution. Lot of opportunities will open up globally for two-wheelers and they will have to be electric,” he stated.

On competition with other electric vehicle brands, Aggarwal stated: “In two-wheelers, the incumbents have not properly invested for electrification and we believe we will absolutely lead the way as our technology is ahead by a few years”.

When asked if the company is also looking at tapping into the Chinese market, he said: “China is not an immediate priority for us”.

“There are enough markets beyond that. The Chinese two-wheeler market is a unique one, while it’s all electric, its all low-speed, low-quality electric vehicles. Transformation is happening there as well,” he added. Aggarwal noted that the company has been very careful to source almost all the components from India, with only the battery cells coming from South Korea.

Asked about the chip shortage situation globally, he said the company is dealing with the issue and has been able to overcome the challenge for the short-term. “It is something that the industry would have to deal with over the next 6-9 months…It is a challenge, so we are trying to deal with it,” he said.

Aggarwal noted that the company plans to enter various segments, including an electric car, in the coming days. He,  however, did not share any details.