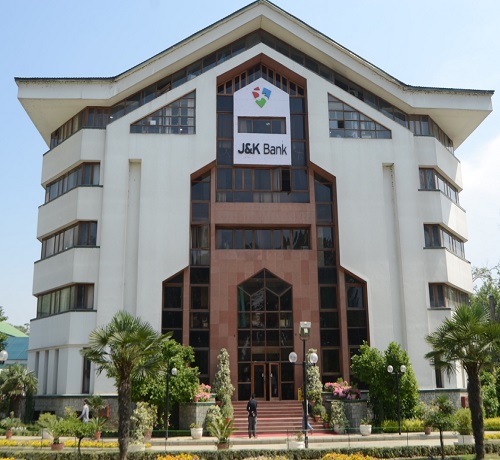 Srinagar:  Building further upon its strong annual performance, J&K Bank posted a Net Profit of Rs 104.32 Cr for the first quarter (Q1) of the Current Financial Year (CFY) 21-22 – a quantum jump compared to Rs 6.50 Cr recorded during the Q1 of last financial year.

The results for Q1 were announced after the Bank’s Board of Directors approved the quarterly numbers in a meeting held here at the Bank’s Corporate Headquarters Friday.

Commenting upon the Bank’s results, CMD R K Chhibber said, “It’s really a good going amid apprehensions of 3rd Covid wave. With all major performance indicators showing an upward trend, the Q1 numbers are fine and in line with the strategy. Quarter-on Quarter basis, we have improved Cost to Income Ratio and reduced Cost of Deposits further. So we feel quite confident that the bank is on its way to leverage the increasing prospects of growth in coming quarters amid the swift and steady nation-wide vaccination drive”,.

“In the meantime, guided by a professional Board, the management is laying more emphasis on increasing the operational efficiency and service delivery systems to effectively capitalise on the much anticipated growth momentum of post-vaccination economy”, the CMD added.

Regarding asset quality, the CMD stated, “Health of every bank is as good as its asset-book and we are actively focused on this aspect. We have steadfastly maintained the quality of our assets which is a healthy sign and is likely to boost future income of the bank”, adding that complying with the regulator’s directions, we are following the real-time system driven classification and downgrade of accounts.

The CASA Ratio of the bank during the reviewed quarter stood at 55.83 %.

Sufficient Provisioning
Creating sufficient provisioning buffer to strengthen its balance sheet further, the Bank’s Provision Coverage Ratio for the reviewed quarter has gone up to 82 % – one of the highest in the industry – as against 80.93 % recorded during the corresponding period last year.

“As bankers we are acutely aware of providing adequately for a rainy day. Therefore, we have made sufficient provisioning to make our balance sheet stronger to meet any unforeseen challenges”, the CMD remarked.

Capital Cushioned
Elaborating upon the Bank’s capital position, the CMD stated, “The bank’s Capital Adequacy Ratio is at 12.01 %, which is well above the regulatory norm.Our capital is sufficient and will get further cushioned after the infusion of Rs 500 Cr by our promoter and majority stakeholder.”

“Besides, the Bank is offering and allotting upto 7.5 crore equity shares during the Q2 to eligible employees under J&K Bank Employees Stock Purchase Scheme, 2021. It is a healthy industry-wide practice to further reinforce and incentivize the staff commitment by increasing their stakes in the institution. Going forward, the bank also envisages raising of capital through Qualified Institutional Placement (QIP) and BASEL–III compliant Tier II Bonds”, he said.

Meanwhile, to boost the morale of the Bank staff during the course of recently concluded business performance review of zones chaired by senior management, CMD R K Chhibber addressed entire staff of the bank. Commending the entire staff for the bank’s annual performance (FY 2020-21), he also spoke about the organizational goals, objectives for the future and shared the roadmap for achieving these.

The CMD said, “An industrial package of Rs 28000 Cr from Central Government to boost the region’s economy and create employment opportunities, gradual opening up of the economy after second Covid-wave and growing tourist influx to J&K and Ladakh are the signs that herald the kicking off of growth cycle in the region” adding, “Therefore the Bank is also positioning itself accordingly and planning to enhance its financial and operational capacities to leverage the  growth momentum and become the biggest contributor in the fast-track economic development that is about to usher in and help in making Jammu & Kashmir prosperous.”

During the course of deliberations, the CMD stressed upon the operative levels to make all out efforts to increase business while working efficiently and improving the customer service.