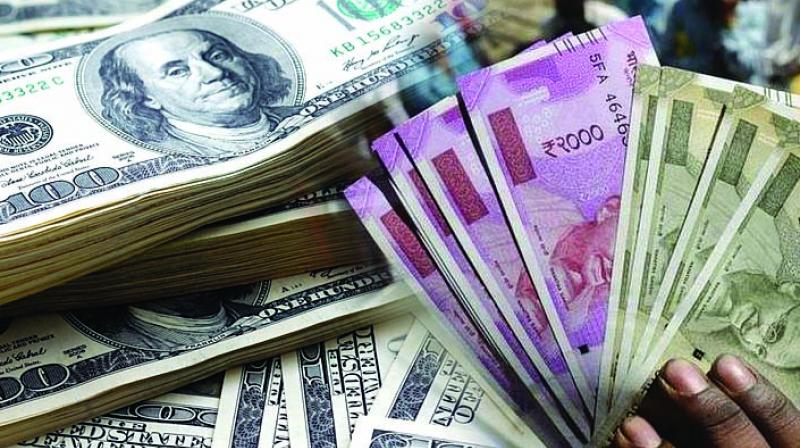 Mumbai: The rupee slipped by 2 paise to close at 74.42 against the US dollar on Monday, snapping its three-day gaining streak amid a muted trend in domestic equities.

Forex traders said the rupee is trading in a narrow range as investors are awaiting cues from the US Fed’s policy decision due this week.

Foreign fund inflows, losses in the US dollar and weaker crude oil prices lent support to the local unit, they added.

At the interbank foreign exchange market, the local unit opened at 74.43 against the dollar and witnessed an intra-day high of 74.40 and a low of 74.52 during the session.

The local unit finally ended the day at 74.42, down 2 paise over its last close. On Friday, the rupee had settled at 74.40 against the US dollar.

“Expectation is that the central bank could maintain a dovish stance and that could keep the dollar weighed down against its major crosses. For the next couple of sessions we expect the USDINR(Spot) to quote in the range of 74.20 and 74.80,” Somaiyaa said.

Meanwhile, the dollar index, which gauges the greenback’s strength against a basket of six currencies, fell 0.22 per cent to 92.70.

Foreign institutional investors were net sellers in the capital market on Friday as they offloaded shares worth Rs 163.31 crore, as per exchange data.

Over this week, the focus will be on the US Fed meeting on Wednesday. Ahead of that USDINR spot may remain within a range of 74.20 and 74.70 on spot, Banerjee added.

The local unit traded in a limited range amid lack of any major triggers, said Sriram Iyer, Senior Research Analyst at Reliance Securities.

“Comments from Chair Jerome Powell which could continue to suggest that the central bank would remain accommodative despite recent spikes in inflation readings and could keep downside limited,” Iyer said.